Epigenetics - How Environment Shapes Our Genes?


The literal meaning of the term epigenetic is “on top of or in addition to genetics.” The series of chemical tags that modify DNA and its associated structures constitute the epigenome, and include any genetic expression modifier independent of the DNA sequence of a gene. The genome defines the complete set of genetic information contained in the DNA, residing within the cells of each organism. The epigenome, on the other hand, comprises the complex modifications associated with genomic DNA, imparting a unique cellular and developmental identity. 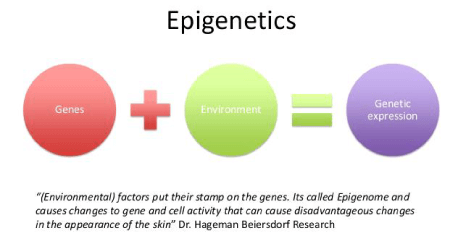 
The environment presents these various factors to the individual that influence the epigenome, and the unique epigenetic and genetic profile of each individual also modulates the specific response to these factors.

During the course of human life, we are exposed to an environment that abounds with a potent and dynamic milieu capable of triggering chemical changes that activate or silence genes. There is constant interaction between the external and internal environments that is required for normal development and health maintenance as well as for influencing disease load and resistance. For example, exposure to pharmaceutical and toxic chemicals, diet, stress, exercise, and other environmental factors are capable of eliciting positive or negative epigenetic modifications with lasting effects on development, metabolism and health. These can impact the body so profoundly as to permanently alter the epigenetic profile of an individual. 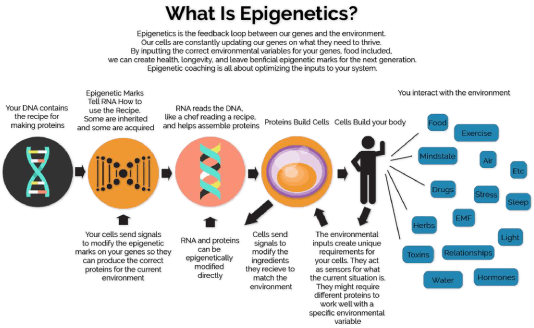 DNA methylation, histone modification and RNA-associated silencing are the major ways these changes are controlled, which are described in more detail below.

Epigenetics across the human lifespan

In many ways, epigenetic expression can be thought of as the “software” of the genome and directs embryogenesis and development, as well as influences the development of an individual's body and brain after birth.

Unique sets of genes are induced or silenced epigenetically during different stages of life and these are responsible for the development and maturation of the individual through orchestrated events in combination with input from the environment. 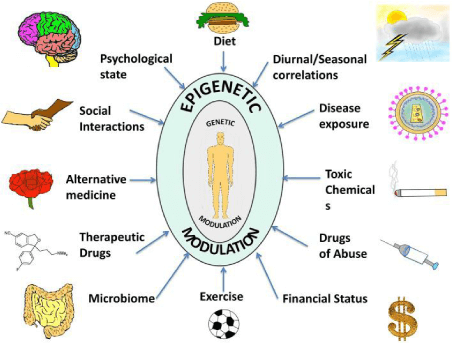 Any kind of epigenetic factors influencing genes or gene expression networks during life stages can result in an imbalance in the regulation process, and might have a life-long effect on the individual. While such flexibility gives rise to beneficial adaptability to environmental conditions, it likewise allows weaknesses to integrate and exert negative and diseased outcomes on both individual and evolutionary scales.

Various external epigenetic factors modulate the biology of an individual at a physical and emotional level. Some of the most important exogenous factors influencing human health are described hereafter:

Studies in genomic imprinting have revealed how DNA methylation patterns are influenced by diet, and how epigenomic sensitivity to environmental cues and specifically diet can be used to influence disease susceptibility.

Variables including diet are capable of influencing epigenetic programing by altering DNA methylation and interfering with gene expression. Such potentially heritable modifications can be regulated by diet-responsive methylation. Specifically, deficient levels of folic acid lead to epigenetic alterations by inhibiting remethylation of s-adenosyl homocysteine (SAH) and s-adenosylmethionine (SAM) which results in demethylation and chromosome instability

Disruption in the balance between reactive oxygen species and antioxidants may result in harmful health effects caused by DNA damage due to the genotoxic effects of oxidative stress. Chemopreventive agents that target the epigenome include micronutrients found in folate, retinoic acid, selenium compounds, polyphenols from green tea, apples, coffee, black raspberries, and other dietary sources. Similar compounds are present in foods containing genistein and soy isoflavones, curcumin, and resveratrol to name a few.

Epigenetic modifications complement the genome in that they do not change the DNA code directly, but influence it in such a way as to present it to the factors that read it and translate it into a final product.

Exercise is one way that an individual can modify their epigenome in order to preserve and prolong life. Exercise has been shown to induce positive changes in DNA methylation within adipose tissue and regulate metabolism in both healthy and diseased individuals

Many drugs are used to enhance or alter the perception of reality and reward pleasure centers in the brain, but oftentimes these substances increase the risk of acute and/or chronic disease. Smoking causes epigenetic changes such as DNA methylation changes, which alter gene expression. DNA methylation is a type of epigenetic change that can result in tumor suppressor genes being inactivated, and methylation of the tumor suppressor gene p16 has frequently been associated with the development of cancer. When p16 is methylated, this gene's tumor suppressing function undergoes inactivation. This is why smoking is a major trigger for carcinogenesis. Alcohol induced neuro-adaptations like tolerance and dependence are a result of epigenetic modulation at the neurobiological level


For the past several decades genetics has been at the forefront in terms of understanding human disease. A recent addition to genetics has been epigenetics, which includes the role of the environment, both social and natural, including day-to-day habits, lifestyle and personal experiences on human health. Epigenetics establishes a scientific basis for how external factors and the environment can shape an individual both physically and mentally.

The knowledge that environment and lifestyle can alter health brings with it awareness that habits, social environment, diet and other factors shape health beyond our acquired genetic traits. Moreover, despite the risk presented by inherited genes and mutations, epigenetic factors play a decisive role in the actual development of disease. Research into epigenetics could lead to insights into how factors like diet and exercise can be customized to an individual in concordance with their naturally inherited genome in order to minimize the risk of developing a disease to which he/she is naturally predisposed.

Ultimately, continued efforts to determine how and when epigenetic switches regulate gene function will elucidate the interplay between the genome, the epigenome, and the environment and facilitate the development and optimization of novel therapeutic tools. In terms of future application, full understanding of these mechanisms will ultimately revolutionize personalized medicine. 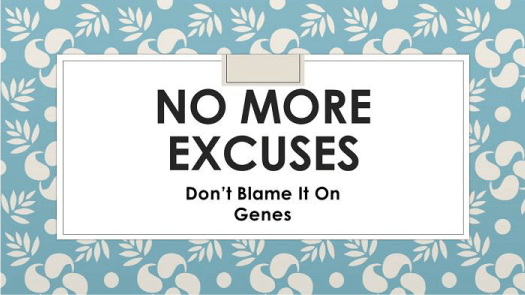