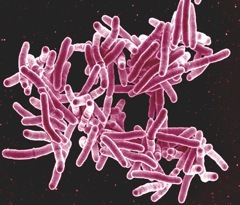 The development of TB disease is a two-stage process. In the first stage, known as latent TB, a person is infected with TB bacteria. In the second stage, known as active TB or TB disease, the bacteria have reproduced sufficiently to usually cause the person to become sick. Some tests are for latent TB, others are for active TB, and some are for both.

A diagnosis of active TB disease can only be confirmed when there is definite evidence of TB bacteria in the person’s body. Some of the TB tests, such as the skin test, look directly for TB bacteria. Others such as the chest X-ray look for the effect of the bacteria on the person suspected of having TB

The accuracy of TB tests

The most accurate tests such as culture take a long time to do. Some tests are also very expensive and require complex laboratory facilities.

Although the culture test for TB is very accurate, it can take several weeks to get a result. It also requires expensive equipment and skilled personnel.

The skin test involves injecting a small amount of fluid (called tuberculin) into the skin in the lower part of the arm. Then the person must return after 48 to 72 hours to have a trained health care worker look at their arm. The health care worker will look for a raised hard area or swelling, and if there is one then they will measure its size. They will not include any general area of redness. 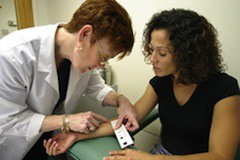 The test result depends on the size of the raised hard area or swelling. The larger the size of the affected area the greater the likelihood that the person has been infected with TB bacteria at some time in the past. But interpreting the TB skin test result, that is whether it is a positive result, may also involve considering the lifestyle factors of the person being tested for TB.2 The TB skin test also cannot tell if the person has latent TB or active TB disease.

The Mantoux TB test is the type of TB test most often used, although the Heaf and Tine tests are still used in some countries. None of these tests though will guarantee a correct result. False positive results happen with the skin test because the person has been infected with a different type of bacteria, rather than the one that causes TB. It can also happen because the person has been vaccinated with the BCG vaccine. This vaccine is widely used in countries with high rates of TB infection. False negative results particularly happen with children, older people and people with HIV.

The Interferon Gamma Release Assays (IGRAs) are a new type of more accurate TB test. In this context referring to an assay is simply a way of referring to a test or procedure. 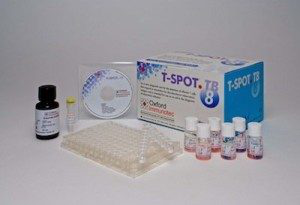 IGRAs are blood tests that measure a person’s immune response to the bacteria that causes TB. The immune system produces some special molecules called cytokines. These TB tests work by detecting a cytokine called the interferon gamma cytokine. In practice you carry out one of these TB tests by taking a blood sample and mixing it with special substances to identify if the cytokine is present.

Two IGRAs that have been approved by the U.S. Food and Drug Administration (FDA), and are commercially available in the U.S., are the QuantiFERON® TB Gold test, and the T-SPOT® TB test. The advantages of an IGRA TB test includes the fact that it only requires a single patient visit to carry out the TB test. Results can be available within 24 hours, and prior BCG vaccination does not cause a false positive result. Disadvantages include the fact that the blood sample must be processed fairly quickly, laboratory facilities are required, and the test is only for latent TB. It is also thought that the IGRAs may not be as accurate in people who have HIV. In low prevalence resource rich settings, IGRAs are beginning to be used in place of the TB skin test. 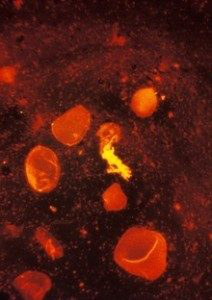 Smear microscopy of sputum is often the first test to be used in countries with a high rate of TB infection. Sputum is a thick fluid that is produced in the lungs and the airways leading to the lungs. A sample of sputum is usually collected by the person coughing.

To test for TB several samples of sputum will normally be collected. In 2012 it was suggested that two specimens can be collected on the same day without any loss of accuracy.

To do the TB test a very thin layer of the sample is placed on a glass slide, and this is called a smear. A series of special stains are then applied to the sample, and the stained slide is examined under a microscope for signs of TB bacteria.

Sputum smear microscopy is inexpensive and simple, and people can be trained to do it relatively quickly and easily. In addition the results are available within hours. The sensitivity though is only about 50-60%.9 In countries with a high prevalence of both pulmonary TB and HIV infection, the detection rate can be even lower, as many people with HIV and TB co-infection have very low levels of TB bacteria in their sputum, and are therefore recorded as sputum negative.

One disadvantage though is that a mercury vapour lamp is expensive and lasts a very short time. Such lamps also take a while to warm up, they burn significant amounts of electricity, and electricity supply problems can significantly shorten their life span. One way of overcoming these problems is the use of light emitting diodes (LEDs). These switch on extremely quickly, have an extremely long life, and they don’t explode.

Chest X-ray as a TB test

If a person has had TB bacteria which have caused inflammation in the lungs, an abnormal shadow may be visible on a chest X-ray. Also, acute pulmonary TB can be easily seen on an X-ray. However, what it shows is not specific. A normal chest X-ray cannot exclude extra pulmonary TB.

Also, in countries where resources are more limited, there is often a lack of X-ray facilities. 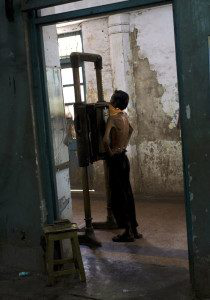 A man receives a chest X-Ray during the admission process at a hospital in India. © David Rochkind

Serological tests for TB are very different from the IGRA tests described above.

Some new molecular tests such as the Genexpert test and the TrueNat test are now beginning to be available. Though they are too expensive to be widely used in many countries, the control of TB in South Africa is starting to show what is possible.

With the development of the new molecular tests there is a beginning to significant progress in diagnosis. However it is unclear why the implementation of these tests cannot be faster. Although there are some issues about the speed with which patients are provided with treatment after receiving a diagnosis, faster diagnosis must surely be a key factor in controlling the TB epidemic in poor resource countries.

What is drug susceptibility testing? 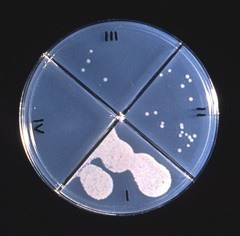 Drug susceptibility testing means testing to find out if a person has got drug resistant TB. That means finding out which drugs the TB bacteria in their body are sensitive to. It is essential that if a person might possibly have drug resistant TB, that this is discovered as soon as possible, in order that the patient can be provided with effective TB treatment. Historically drug susceptibility testing has been done through culturing the bacteria. It has needed specific laboratory facilities and trained personnel. In addition it is a very lengthy process. There are however now some new tests available one of which is the Genexpert test. This is much easier to use, but it only provides limited information about drug resistance.

Since resistance arises from genetic mutations, this approach is to detect the mutations themselves. Many mutations associated with resistance have been identified and molecular tests to detect them have been developed. The advantages of molecular methods of drug susceptibility testing include rapid turnaround times, but the disadvantages include a low sensitivity for some compounds, and a major issue is cost.

It is generally perceived that specialist staff is required in order to perform molecular assays. However, some assays such as the Genexpert are extremely easy to use. They can even be taken out of the laboratory setting and used as a “near” point of care test.

Beacon assays detect M. tuberculosis complex and associated rifampicin resistance directly from sputum samples using ultra sensitive PCR. The Genexpert TB assay is an automated real time based system that has a number of advantages including the fact that it is a closed tube system. The WHO is encouraging the use of the Genexpert TB test, but it has a number of disadvantages including cost.

Line probe assays are tests that use PCR and reverse hybridization methods for the rapid detection of mutations associated with drug resistance. Line probe assays are designed to identify M. tuberculosis complex and simultaneously detect mutations associated with drug resistance. One of the disadvantages with these assays is that they have an open-tube format, which can lead to cross contamination and an increased risk of false positive results.

Line Probe Assay (LPA) technology is suitable for use at national/central reference laboratories, or at laboratories where there is proven capacity to conduct molecular testing. There must be adequate and appropriate laboratory infrastructure and equipment. This must also include the necessary biosafety precautions and the prevention of contamination. Appropriate laboratory staff also need to be trained to conduct LPA procedures.